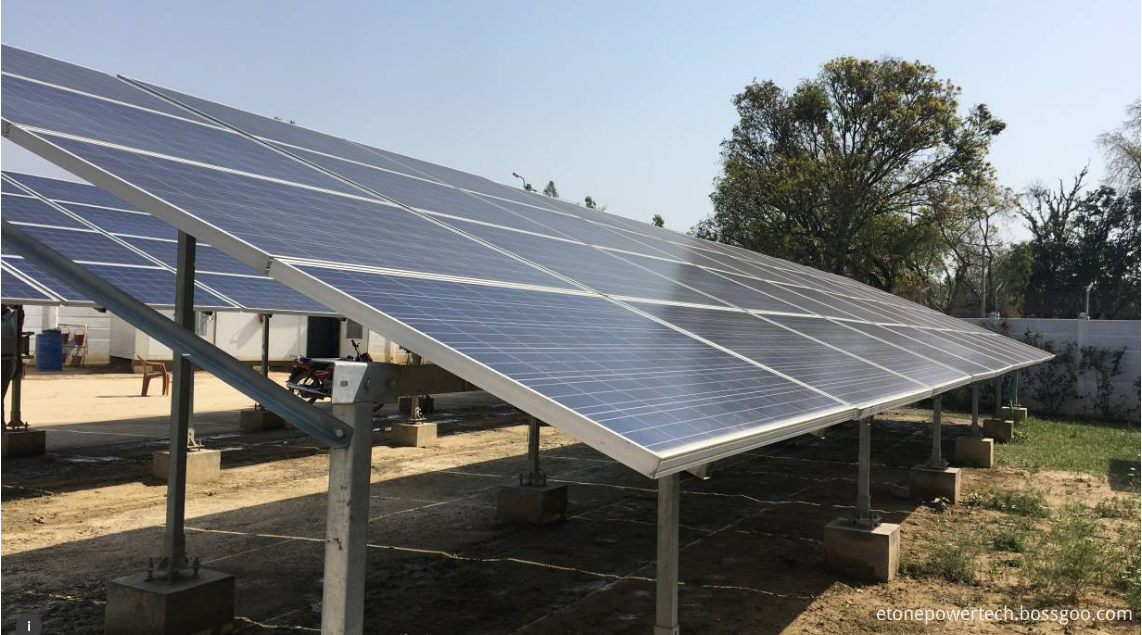 ATRAULI, India, April 3 (Thomson Reuters Foundation) - A dusty plastic sheet covers a large diesel generator in a corner of a petrol station in Atrauli, a village in India's northern state of Uttar Pradesh, a modest but telling sign of progress.

The gas station used to shut at 7 p.m. every day because the lights would often go off, and there was no way to know when they would come back on, said Sudhakar Singh, the manager.

"The main power supply was very irregular, and operating the generator was expensive, so we could not afford to stay open beyond 7 p.m.," Singh told the Thomson Reuters Foundation, as motorbikes and trucks lined up for petrol and diesel.

Last year, the pump got a connection to a solar mini-grid, a local power network not connected to the national grid, which guarantees six hours of electricity every day. The pump has since stayed open all night.

"Now, our expenses are lower and we earn more because we can stay open all night. We have not used the generator once since we got the ... connection," said Singh.

Fast-dropping costs for solar power, combined with plenty of sun and a huge need for electricity in a country where about 300 million people - a quarter of the population - are still without it means solar energy has huge potential in India.

Despite Prime Minister Narendra Modi's pledge to supply power to every citizen by 2019 and a surge in solar production, reaching remote villages remains a challenge, with distribution losses as high as 30 percent on antiquated lines, low tariffs and limited use.


Most of those without electricity live in the 99 percent of villages the government deems to be electrified because at least 10 percent of households and public places have electricity.

But at least half the electrified households do not get at least six hours of electricity a day.

"While the grid has expanded and we generate enough power, distribution companies are not in a position to take that power, and are not interested in going into rural areas," said Aruna Kumarankandath at the Centre for Science and Environment.

"When the supply is so unreliable, people use it sparingly, making it an unattractive proposition to invest in," said Kumarankandath, a renewable energy researcher.

The situation is particularly dire in Uttar Pradesh, India's most populous state where only 37 percent of households are electrified, compared with 67 percent nationwide.

Help has come from private mini-grids like the one in Atrauli operated by OMC Power, a company with 67 grids in the state.

Renewable energy is key to India's electrification plan, and mini-grids with a capacity of 10 to 500 kilowatts (KW) are playing an increasingly important role.

"Mini-grids use the potential of untapped renewable energy and manage demand efficiently by generating power at the source of consumption," said Kumarankandath.

A base home package from OMC Power costs 110 rupees ($1.70) a month and comes with a switchboard with an LED bulb and a socket for charging a mobile phone. Additional lights, fans and even a television can be added.

"There is enough demand in rural areas. If the supply is reliable and good, people are willing to pay more," he said.

Uttar Pradesh is the only state with a policy for mini-grids. It aims to power nearly 20 million households, about a tenth of its population.

The state offers a 30 percent subsidy for these grids, which may also be powered by wind, biomass or water, and must guarantee at least eight hours of electricity to homes, and six hours for commercial needs.

It aims to deploy at least 10,000 renewable energy projects in the next five years in "unserved and underserved parts of the country", with an average capacity of 50 KW per project.

The ambitious targets come at a time when renewable energy is at a turning point in India, as generating electricity from renewables costs nearly the same as from conventional sources.

Coal still provides the lion's share of energy, but as a signatory to the Paris Agreement on climate change, India is committed to ensuring at least 40 percent of its electricity will come from non-fossil-fuel sources by 2030.

A 10-year blueprint predicts 57 percent of India's electricity capacity will come from non-fossil sources by 2027.

Solar energy is a particular focus and will contribute 100 gigawatts (GW) of the renewable energy capacity target of 175 GW by 2022.

"That in turn will ensure women's empowerment, better health and education. There cannot be a better development agenda for the country," she said.

In Atrauli, OMC's mini-grid is just off the main road, next to the telecom tower it also helps to power. OMC has 280 customers in Atrauli, 60 percent of them commercial, Rao said.

One of OMC's first customers in the village was Anita, a widowed mother of two, who didn't have an electricity connection and used kerosene lamps for lighting in her shack.

From one base package of a single light, Anita now has three lights, one each in her room, her son's room and the kitchen.

"Earlier, the children would have to go search for a light to study by. But now they study at home, and I can do housework even at night," she said. "I would like to add a fan next."


Oil filter as a component of the internal combustion engine, plays a very important role in the lubrication system, the engine can be generated in the combustion process and mixed with oil in the dust, metal debris, carbon particles and oil gradually generated gum Impurities to filter out, so as to clean the oil, protect the generator, so that the life of the internal combustion engine greatly improved, but also extend the life of other parts.