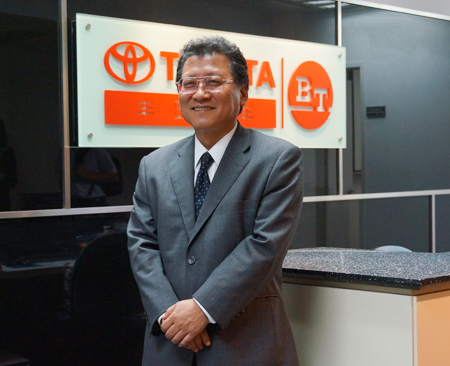 "The world's largest market is also the most competitive market."

Toyota Automatic Weaving Machines began production and sales of forklifts in 1956. Currently, the Japanese market share is 43% (46 consecutive years, first), the world market share is 18% (first in nine consecutive years), and it has a leading global market. Share. "In 2003, Toyota Industrial Vehicles (Shanghai) Co., Ltd. was established. Toyota Forklifts formally entered the Chinese market, but our history here is relatively shallow, and it is still a new brand under development." Last year, the Chinese market sold more than 230,000 units. No one in the world can shake it. Such a market has attracted more and more excellent brands, not only many excellent local brands, but also many well-known foreign brands. The Chinese market has also become the most competitive market in the world.

In Japan, battery forklifts account for 55% of the total forklift market share. In Europe and the United States, this figure exceeds 60%. In comparison, although the sales volume of battery forklifts in China has increased in the past two years, it still hovered at around 20%. "As fuel prices rise, environmental awareness increases, and government support policies are introduced, we firmly believe that in the near future, the ratio of car batteries should be rapidly increased. In Japan, since 1990, battery forklifts have begun to blow-out. The growth, especially for forklift trucks up to 3 tons, is particularly rapid in the progress of battery development."

Toyota will respond to the theme of global environmental protection and energy conservation based on its corporate social responsibility, and is committed to the popularization and market expansion of battery forklifts. On the one hand, following the Japanese, European and American markets, it began to develop and produce high-quality, cost-effective battery forklifts in China; on the other hand, the most important factor that hinders the progress of battery development is that the initial investment cost of battery vehicles is higher than that of the internal combustion vehicles. In fact, the battery forklift has not only no exhaust emissions, but also has a lower cost of use than the internal combustion forklift in view of the entire product life cycle. â€œSo we will actively prepare to collect relevant data and cases, and when we make proposals for car batteries to customers, we can help them consider the overall cost of products from the perspective of the entire life cycle. At the same time, we are also actively working to cultivate the most accurate machines. The sales personnel of the type, number, and model proposal will build the most complete service system for those who are interested in purchasing battery forklifts from the software.â€

"Using step-by-step product development and production localization to cater to the needs of Chinese customers to the greatest extent possible."

In order to increase the competitiveness in terms of cost-effectiveness and delivery time in a highly competitive market in China, the localization strategy is an inevitable trend. In addition to the localization of production, we sincerely listen to the opinions of Chinese customers. Product development based on local needs is also very important. â€œIn the future, we will gradually implement more localization of the development and production of new models to meet the needs of Chinese customers as much as possible, and spare no effort in creating products that will allow more customers to identify and satisfy.â€